A robust performance in a transition year.

(1) Adjusted for amortisation of allocated goodwill and exceptional items
(2) Earnings per share, fully diluted
(3) Ratio of Cash flow from operations for the financial year to EBITA for the same year
(4) Subject to shareholders approval at the next Annual General Meeting on May 25th, 2018
(5) Including all acquisitions made in 2017 as if they had been consolidated starting in January 1st, 2017, 2017 pro forma EBITA margin would have been 5.9%

‘2017 was a year of significant changes for SPIE, with the acquisition of SAG, the largest ever, a record level of bolt-on acquisitions, the launch of an ambitious reorganisation in France and the disposal of non-core activities. In 2017 we also had to face operational challenges in the UK, which impacted our financial performance.
As it emerges from these structural changes, we believe that the Group is stronger, truly European and well positioned to benefit from a renewed market momentum.
Going forward, we expect further revenue growth, with improving organic trends and strong bolt-on M&A. Even if it will be masked in 2018 by consolidation impacts from last year’s acquisitions, underlying margin improvement will resume.’

Adjusted net income Group share (before amortisation of allocated goodwill and exceptional items) amounted to €212.3 million, with adjusted EPS (fully diluted) at €1.37, up +7.4% compared to 2016.

Net income Group share amounted to €110.4 million, lower than its 2016 level of €184.0 million, primarily due to higher restructuring costs and allocated goodwill amortisation in 2017, as well as a one-off €35.8 million net gain from deferred tax adjustment in 2016.

(1) Restated in accordance with IFRS 5 (refer to notes to 2017 consolidated financial statements for further details)
(2) Earnings before interest, taxes, depreciation and amortization for the last twelve months, computed as if all 2017 acquisitions had been consolidated starting in January 1st, 2017 and including SAG synergies 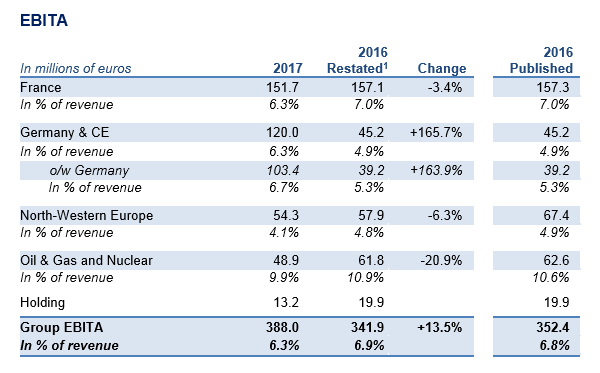 With a +1.1% organic growth over the full year, revenue picked up in France in 2017, after four years of decrease. Organic growth in the second half of the year was higher than anticipated, at +2.8% (-1.1% in the first half). Growth came mostly from the Industrial and Telecom sectors, while activity in the Commercial sector remained very competitive. Growth from acquisitions was +6.3%, primarily reflecting the consolidation of SAG’s French activities since April 2017, as well as bolt-on acquisitions.

Strong competition in the Commercial sector and, to a lower extent, low initial margins in fiber-to-the-home deployment contracts resulted in margin decreasing to 6.3% in 2017.

2017, SPIE initiated an ambitious reorganisation of its activities in France, in order to address more effectively the evolution of clients’ needs. Following the ‘Ambition 2020’ project, which led to the creation of two entities dedicated to Technical Facility Management (SPIE Facilities) and Telecom and Energy infrastructure (SPIE CityNetworks), SPIE is now completing the move from a regional multi-technical structure to a national, market-focused organisation, with the creation of two new divisions addressing the Industrial and the Commercial markets. SPIE France, a newly-created company, will thus regroup five entities: SPIE Facilities, SPIE CityNetworks, SPIE ICS, SPIE Industrie & Tertiaire (which will include two divisions, dedicated to the Industry and Commercial sectors) and SPIE Nuclear. This organisation is similar to that adopted in other countries. It aims at maintaining a strong proximity with customers through a dense footprint, while maximising commercial responsiveness and ensuring top-tier expertise and innovation.

The acquisition of SAG in March 2017 marked a turning point in SPIE’s development in Germany. The integration is making fast and substantial progress and synergies are being delivered according to plan. SPIE’s position on the German market was further enhanced by two bolt-on acquisitions and the Group plans to continue growing in this country. At our historical German operations, EBITA margin made further progress thanks to contract selectivity and strong customer activity across the board.

In Switzerland, after the restructuring carried out in 2016, SPIE started to benefit from a much stronger organisation and is now actively looking to grow while continuing to improve its margins.

In the Netherlands, five bolt-on acquisitions enabled SPIE Nederland to gain leadership positions in the Smart City and Retail Installation markets, while strengthening its ICT capabilities. On the back of supportive market conditions, organic growth was solid and EBITA grew significantly.

In the UK, SPIE reported a small positive EBITA despite the one-off loss recorded in the second quarter of 2017, as well as increased margin pressure in a more challenging economic environment, which led to negative organic growth. Having initiated the exit from low value-added activities, SPIE will focus on a smaller portfolio of core services going forward.

In Belgium, EBITA grew slightly in 2017 as activity recovered, as anticipated, in the second half of 2017 after a slow start. In January 2018, SPIE was recognised as “Top employer in Belgium” for skills development at all levels, a good working environment and digitalization initiatives.

In December 2017, SPIE signed an agreement for the sale of its Moroccan subsidiary, in line with the Group’s strategy to focus on European markets.

SPIE’s Nuclear activities saw, as planned, a modest decrease in revenue (-2.3%), linked to the “Grand Carénage” phasing, with no impact on margins.

In Oil & Gas, revenue contracted by -17.4% at constant currency and margins decreased as anticipated. In-depth restructuring was effectively completed in 2017 to adapt central and regional overhead structures to current activity levels.

A record year for bolt-on M&A

SPIE delivered strongly on its bolt-on acquisitions strategy in 2017, with 11 companies acquired, representing a record level of €321 million of full-year revenue (excluding SAG).

Underpinned by the Group’s strong Free Cash Flow, bolt-on acquisitions are the driving force of SPIE’s growth model in very fragmented markets. 2017 bolt-on M&A activity was primarily focused on Germany and The Netherlands and, to a lesser extent, on France. It allowed the Group to scale up positions in attractive markets, progress towards a balanced activity portfolio, develop ICT capabilities and acquire niche expertise (see appendix).

The aggregate EBITA multiple for these transactions was 6.0x(1).

In 2017, SPIE initiated the disposal of four non-core activities, with closing and cash proceeds expected in 2018.

(1) Before synergies and impact of working capital improvement – Based on an adjusted normative EBITA for Ziut
(2) Earnings before interest, taxes, depreciation and amortization for the last twelve months, computed as if all 2017 acquisitions had been consolidated starting in January 1st, 2017 and including SAG synergies

In March 2018, SPIE successfully secured the refinancing of its bank debt through two fully-committed undrawn new facilities: a term loan of €1,200 million and a revolving credit facility of €600 million, both maturing in 2023 (vs. 2020 for existing facilities) and fully unsecured and unguaranteed (vs. guarantees from SPIE’s main subsidiaries for existing facilities). These facilities will bear interest equal to EURIBOR (or any other applicable base rate) plus an opening margin of 1.70% for the term loan and 1.30% for the revolving credit facility, compared with 2.38% and 2.28% respectively for the existing facilities (see appendix).

In March 2017, SPIE successfully issued a €600 million bond, in order to finance the acquisition of SAG (fixed-rate, euro-denominated, with maturity in 2024 and an annual coupon of 3.125%). Upon completion of the above refinancing, guarantees provided by SPIE’s main subsidiaries for this bond will be automatically released in accordance with its terms and conditions.

SPIE intends to continue to actively manage its debt and diversify its sources of financing.

On account of SPIE’s particularly high M&A activity in 2017, pro forma revenue and EBITA margin for 2017 (i.e. including all acquisitions made in 2017 as if they had been consolidated starting January 1st, 2017), are presented below for comparison purposes.

2017 pro forma EBITA margin would have been 5.9%, reflecting the impact of the full-year consolidation of acquisitions made in 2017, in particular:

As a result, Group revenue is expected to grow in excess of 7.0% at constant currency in 2018.

The dividend pay-out ratio will be c.40% of Adjusted Net Income attributable to the Group.

This press release does not contain or constitute an offer of securities for sale or an invitation or inducement to invest in securities in France, the United States or any other jurisdiction.