- A solid performance in H1, in line with expectations

Upon the presentation of the 2018 half-year financial information, Gauthier Louette, Chairman & CEO, declared: ‘SPIE’s solid performance in the first half of the year confirms the renewed momentum observed in most of our geographies. France and Germany are the driving forces of this performance, with healthy organic growth and good margin trajectories. We are delivering on our long-standing bolt-on acquisitions strategy, with three companies acquired in 2018 so far, and cash generation remains a key area of focus. We are confident for the balance of 2018 and confirm our guidance.’

[1] Including all acquisitions made in 2017 as if they had been consolidated starting in January 1st, 2017
[2] Restated in accordance with IFRS 5, consistently with FY17 published figures (refer to 2018 interim financial statements)

Net income (group share) was €(17.5) million in H1 2018, impacted by one-off costs linked to the disposal of Distribution services activities in the UK and a negative performance from the discontinued SAG Gas & Offshore activities. Adjusted for non-recurring costs and allocated goodwill amortisation, Adjusted net income (group share) was €71.0 million. 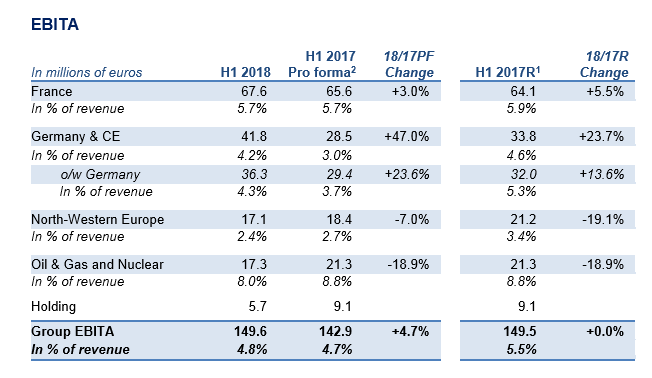 [1] Restated in accordance with IFRS 5, consistently with FY17 published figures (refer to 2018 interim financial statements)
[2] Including all acquisitions made in 2017 as if they had been consolidated starting in January 1st, 2017

The EBITA margin of 5.7% was in line with H1 2017 pro forma level, as operational improvements compensated, as anticipated, for the decrease in CICE[1].

On July 1st, 2018, SPIE France completed the set-up of its new organisation based on five market-focused divisions. It will enhance SPIE’s future growth and profit in France through the better sharing of innovations and specific areas of expertise. It will therefore enable SPIE to provide integrated solutions with consistent high-end service to each of its strategic markets in France.

In the second half of the year, SPIE expects a further underlying margin increase, driven by an uptick in fiber-to-the-home activities margins, as well as mix improvement resulting from higher contract selectivity in commercial installation.

In Germany, organic growth stood at +5.3%, with good customer activity in all divisions, particularly in High Voltage and Building Technology activities. Continued progress in EBITA margin (compared to H1 2017 pro forma) resulted from the ramp up of cost synergies as well as improved operational performance. Reflecting the Group’s strong development and quality of delivery, SPIE was ranked number one facility services company in Germany in the 2018 Lünendonk study.

Their complementarity with our historical service portfolio is already evidenced by the first commercial synergies delivered in the E-mobility and Smart city markets.

The disposal process of SAG Gas & Offshore activities is ongoing.

In Central Europe, revenue growth was good, particularly in Transmission & Distribution Services. In Switzerland, margins made further progress, benefitting from contract selectivity and from the better-performing organisation implemented in 2017.

In the Netherlands, activity is gaining momentum after a slow start to the year, with strong order intake and good prospects across the board. The turnaround of Ziut is a key area of focus; the company is however at the forefront of Smart city innovation, having won the 2018 Dutch IoT award, for its Internet of Things solution for public lighting management.

In the UK, revenue held up well in the second quarter, supported by Data Center contracts, however margins remained under pressure. In June 2018, SPIE UK completed the disposal of its Distribution activities (underground and overhead).

In Belgium, revenue grew strongly in H1 2018, on the back of very dynamic market trends. The acquisition of ICT specialist Systemat was completed on April 27th and the integration process started immediately. EBITA margin was solid although lower than in H1 2017 due to a slow start in nuclear maintenance activities.

In Oil & Gas Services, organic revenue contraction moderated in the second quarter, while margins remained under pressure as anticipated. Recent tendering activity and the continued development in downstream activities provide encouraging signs that activity levels are bottoming out.

SPIE's Nuclear activities reported a mid-single digit organic contraction, reflecting the anticipated EPR contract ramp down, and solid margins. The second half of the year should benefit from an increase in Grand Carénage activity and from the Group’s strengthened position in general electrical installations.

Since the beginning of 2018, SPIE has completed 3 acquisitions totalling approximately €85 million of full-year revenue:

On July 19th, 2018, SPIE announced the success of its new employee shareholding plan, Share For You 2018. This operation was a new opportunity for SPIE’s employees to become shareholders on preferential terms, and to participate in the Group’s performance and development. The offer was subscribed by over 6,000 employees and 1,471,793 new shares were issued on July 20th, 2018, raising €21 million. Employee shareholding, through the various Share For You plans, consequently amounts to 4.4% of SPIE’s share capital. In October 2017, SPIE joined the FAS IAS index, which brings together 32 French companies identified as the most advanced in terms of employee shareholding.

As a result, Group revenue is expected to grow in excess of 7.0% at constant currency in 2018.

The dividend pay-out ratio will be c.40% of Adjusted Net Income[3] attributable to the Group.

[1] Or any other applicable base rate
[2] Including all acquisitions made in 2017 as if they had been consolidated starting in January 1st, 2017, 2017 pro forma EBITA margin would have been 5.9%.
[3] Adjusted for the amortisation of allocated goodwill and exceptional items

The consolidated financial statements of SPIE SA as of and for the six months ended June 30th, 2018 have been authorised for issue by the Board of Directors on July 26th, 2018.

Auditors’ review of the consolidated financial statements is complete and the statutory auditors’ report on the 2018 half year financial information has been issued.

This press release does not contain or constitute an offer of securities for sale or an invitation or inducement to invest in securities in France, the United States or any other jurisdiction