- EBITA up +1.2% - Group margin impacted by underperformance in the UK in H1

. Group EBITA margin between 6.3% and 6.5%, slightly below previous expectation

Adjusted(1) EPS to grow strongly, in line with previous expectations

(1) Adjusted for amortisation of allocated goodwill and exceptional items
(2) Restated in accordance with IFRS 5 (refer to notes to 2017 interim consolidated financial statements for further details).

Commenting on the results, Gauthier Louette, Chairman & CEO, declared: ‘We are reporting today our first set of results including SAG, which is already changing the reach and balance of the SPIE Group. The integration process is well on track and we have initiated the divestment of SAG’s Gas and Offshore activities, which do not fit within SPIE’s strategy. Revenue in the first half was in line with our expectations and we delivered strongly on bolt-on acquisitions, with a particular emphasis on the German market. Group margin was lower than in the first half of last year, mainly due to an underperformance in the UK, which has been fully addressed. We are confident that SPIE will deliver another year of strong EBITA growth in 2017.’ 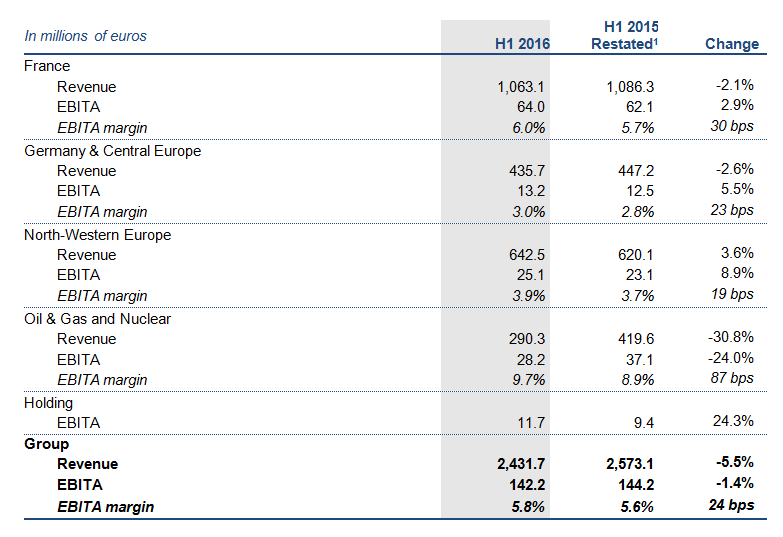 In the France segment, revenue growth was +3.9% year-on-year, driven by acquisitions, most notably the addition of SAG’s French activities. Organic growth was -1.1%, with good momentum at the recently created SPIE CityNetworks (telecoms and electrical grid services), and a slight increase in public sector activity, offset by high contract selectivity in the commercial sector. Current market trends and tendering activity remain consistent with our forecast of stabilized revenue over the full year of 2017, pointing to an improvement in the medium term.

EBITA margin was 5.8%, against a very strong 6.2% in H1 2016 (up from 5.7% in H1 2015). This reflected a still challenging environment in the commercial sector, as well as rapidly expanding activity with telecom operators, particularly in fiber-to-the-home deployment. Such digital network services typically have lower initial margins, and are expected to reach their full potential over time.

In Germany, the market background continued to be very supportive, translating into solid organic growth and further margin development at our historical operations. The integration of SAG is progressing well and the first synergies have already been delivered to plan. We have initiated the divesture of SAG’s Gas and Offshore activities (14% of SAG FY16 revenue), which is, therefore, accounted for as discontinued activity under IFRS 5.

In Switzerland, our operations are now aligned with the SPIE model, and on the way to profitable growth.

The steep EBITA decrease is entirely attributable to the underperformance in our UK business, where a loss was booked in our electricity distribution business. Corrective actions have been swiftly taken so that no further impact is expected in H2. An increasingly competitive environment has also led to reduced activity.

In the Netherlands, both revenue and margins were good in H1 2017, underpinned by excellent organic growth across the board and a good contribution from recent acquisitions. In Belgium, while activity this year is skewed towards H2, overall trends remained very solid, and margins made further progress.

In our Oil & Gas activities (now less than 5% of Group revenue), we saw continued deterioration in customer activity, and we are actively managing the further downsizing of our operations. Revenue contracted and margins were affected, while remaining well-above Group average.

Our Nuclear activities turned in a robust performance, reflecting SPIE’s strong position on this market, with stable revenue year-on-year and solid margins. In light of H1 2017 performance, the full-year revenue decline linked to Grand Carénage cyclicality is expected to be more modest than initially forecast.

Momentum in bolt-on acquisitions has been very strong since the beginning of the year:

. On April 13th, 2017, SPIE acquired Lück Verwaltungs GmbH in Germany, a specialist in building technology services employing 1,000 people and generating annual revenue of approximately €130 million. SPIE will capitalize on this acquisition to develop its mechanical and electrical services capabilities in Germany, and progress towards a balanced activity portfolio, in keeping with its stated objectives;

. On May 10th, 2017, SPIE acquired Mer ICT in the Netherlands, a provider of integrated communication solutions with 20 employees and annual revenue of approximately €4 million;

. On July 11th, 2017, SPIE signed a protocol for the acquisition of Ziut BV in the Netherlands, an expert in installation, management and maintenance of public lighting, traffic control systems and video surveillance, employing 440 people and generating annual revenue of approximately
€114 million. With this acquisition, SPIE Nederland will step up its service offering in the Smart City market.

. On July 20th, 2017, SPIE acquired Probia Ingénierie in France, a company involved in the design and delivery of automated equipment for the agri-food industry, with annual revenue of approximately €3 million.

Upon signing of the acquisition of Ziut BV(1), total annualised revenue acquired will amount to
€267 million, well-ahead of our initial guidance.

The outlook for 2017 is slightly revised due to the initiated divestiture of SAG’s Gas & Offshore activities (now accounted for as per IFRS 5 in the Group’s consolidated accounts) and lower margin expectations in the UK and in Oil & Gas.

Revenue acquired in 2017 through bolt-on acquisitions is now expected between €270 million and
€300 million on a full-year basis.

. Group EBITA margin is expected between 6.3% and 6.5%, slightly below previous expectation.

Adjusted EPS is expected to grow strongly, in line with previous expectation.

The dividend pay-out ratio will remain at c.40% of adjusted net income attributable to the Group. SPIE will pay an interim cash dividend of €0.16 (30% of the approved dividend for 2016) in September 2017.

The consolidated financial statements of SPIE SA as of and for the six months ended June 30th, 2017 have been authorised for issue by the Board of Directors on July 27th, 2017.

Auditors’ review of the consolidated financial statements is complete and the statutory auditors’ report on the 2017 half year financial information has been issued.

The historical figures (up to FY16) related to SAG included in this press release have been provided to SPIE by SAG within the context of the acquisition process. These historical figures have not been audited or subject to a limited review by the auditors of SPIE.

This press release does not contain or constitute an offer of securities for sale or an invitation or inducement to invest in securities in France, the United States or any other jurisdiction.